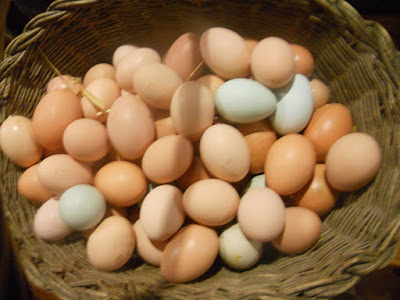 This one egg was just laid by a little red hen. She comes from the Rhode Island Red clan. This little red hen (LRH) laid this egg in a cozy, dark and boxy kinda place. Each day she likes to visit this same place, her cubicle, when she feels the egg laying urge. The bottom of the box is covered with clean white pine shavings. The farmers give handfuls of new shavings whenever the shavings are sticky or sparse. (Sometimes a careless hen puffs them all out).

When the LRH is not inside the henhouse, aka The Eggmobile, laying an egg, she is outside. She scratches about on the earth. When there is scratching, there is finding. She eats bugs, worms, seeds and other bits of things. On rainy days, she hangs out inside with her sisters or mills about under The Eggmobile.

Each morning, when the sun is just above the treeline in the east, one of the farmers arrives with a large bucket of fresh water and another bucket of mashed grain. The water comes from the green hose, through the frost-free hydrant, underground from the pressure tank, through the pump, from the deep well. The farmer pours out yesterday's water and fills two black rubber pans with the cool, fresh water.

The other bucket holds mashed grain. The farmer pours or scoops it into one of three wooden feed troughs. the farmer always moves the feed troughs around the henyard. Before the bucket the mashed feed was in a huge metal grain bin. One of the farmer's fathers built the grain bin. It was manufactured by a company called Brock. It says BROCK on its side. The farmer's father put it together like an Erector set, one nut and bolt at a time. Hundreds and hundreds of nuts and bolts. Fit and tightened. Now the grain bin is able to hold thousands of pounds of feed. The feed comes by truck from Lewiston, Maine. A mill there makes grains and legumes into mash and pellets for animals. The grains and legumes grew in Canada, most likely, in large fileds, tended by farmers and their tractors. The grains are Certified Organic.
Soybeans. Corn. Field peas. Roasted soybeans. Oats. Alfalfa.
There are also vitamins and minerals in the mashed feed. Calcium carbonate. Mononcalcium phosphate,
DL Methoinine and many others.

For the whole winter until a few weeks ago, the LRH and her flock were living in a large plastic covered hoophouse. There were roosts and laying boxes in there and lots of sunlight.

A few weeks ago, the tall farmer moved The Eggmobile onto the pasture, poked a flexi-net fence into the defrosting earth in a large circle around the coop and moved the hens, two by two one night. He wore a headlamp and carried the LRH and all of her sisters to the Eggmobile. The farmers kept the whole flock inside for a few days so the hens would remember that it was home and so they would all find the egg laying boxes. At last the farmer opened the hatch to the ramp --and the spring earth.

The fence is important to the hens and thus the eggs. It keeps everything safe from predators like raccoon, skunk, fox  and neighborhood dogs. It also keeps the hens inside their yard. They do not touch it as it carries a blip-blip-blip of electricity made in a solar charger right there on the southern side of the yard. The farmers borrowed this charger from a friend. The farmers know where the on/off button is and how to push it to stop the blip-blip-blip so they rarely get shocked, but it does happen.

Each day, when the sun is high in the sky, one of the farmers arrives to the henyard. The farmer always carries a basket. The farmer usually remembers to turn off the fence. The farmer always hops over the fence. First the right leg swings over, then the left follows. The farmer walks to The Eggmobile and opens two doors pretty high up on the end of the building. The laying boxes! The cubicles! The eggs!

The farmer collects the eggs two at a time with her right hand and places them in the basket. With a 'thank you' and goodbyes, she closes the two doors, turns the latch and walks to the fence. Over again and on goes the charger. The farmer walks back to the farmhouse basement. The basket of eggs sits in the cool space until the following morning.

Each early morning, after the hens have been fed, one of the farmers (they take turns) packs eggs. Each egg is inspected for dirt or cracks and washed if necessary. The good eggs are placed in egg cartons. The farmer writes down the day's harvest on an Egg Production Log. The eggs are stored in the large, cold walk-in cooler in the barnyard.

Sometimes neighbors stop by to buy eggs. They pay $4.50/dozen. Sometimes the farmers and their family members eat the eggs. They pay nothing. Most of the eggs get packed into large boxes and put in the van for a ride to Belfast. The Belfast Coop resells them to their customers. Belfast Coop customers pay something like $5.89/dozen.
This isn't really the end of the egg story. (The egg is eaten and becomes part of a human!)
This isn't really even the beginning. 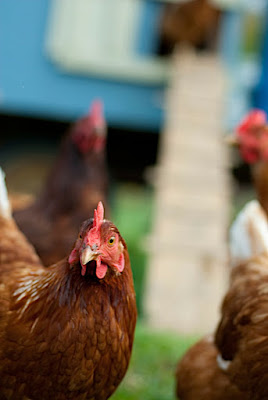 Posted by Villageside Farmers at 2:11 PM No comments: