We notice the chill in the mornings these days. The cold well water in the huge wash tubs doesn't feel so "refreshing" but has been called "numbing" instead. We have begun eating dinners inside rather than out on the porch. Bare footed boys have been seen in crocs and even --gasp!--socks. The pumpkins are coloring up, the onions are all curing in the greenhouse and the bees that camp out on the sunfowers remain loagy for several hours each morning. These are some of the many signs of fall that we notice. Here are a few more pictures and words about what we have been up to. 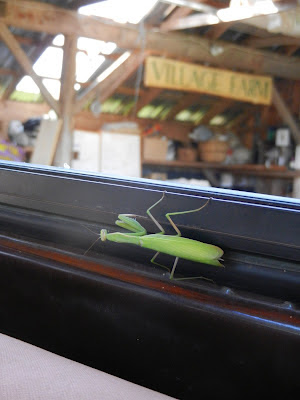 This preying mantis hitched a ride out of the corn field with me a few weeks ago. I hung out with it for quite a while that day. I gave it a ride in Brownie, the farm truck, brought it to show the boys and crew and then released it back into the green where it is so at home. When we bought this land in 2001, 25 of the 40 acres of field were planted to corn. It seemed to us then that that was ALL there was in the field. No bugs, weeds or birds. Just a whole lot of corn. Whenever I see a new bird perching in one of the trees we planted or find a new to my eyes insect, I feel and realize how much diversity we have allowed back into this small world of Village Farm. I don't feel proud of that fact, exactly, just happy and lucky. 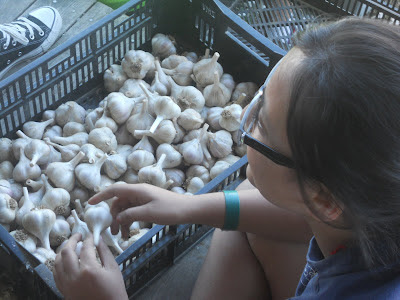 Speaking of diversity, we hosted a group of incoming Colby College students over Labor Day weekend. This picture is of Pralaksha, a real sweet heart of a person who grew up in Bhutan. She is probably a first for this land, too, I would venture to guess. What a pleasure to spend a weekend with 13 fine, fine young people, all on the verge of their college years and all so equipped already, it seemed,with much intelligence and keen insights into life. We worked, cooked, ate and played Ultimate frisbee. We are grateful for their helping hands and most excellent company. 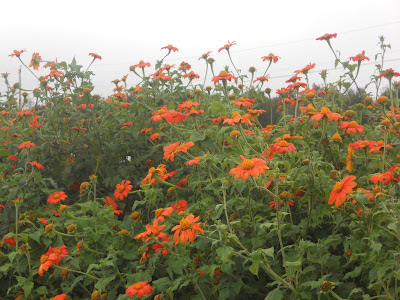 A sea of tithonia in the mist. Just pretty. 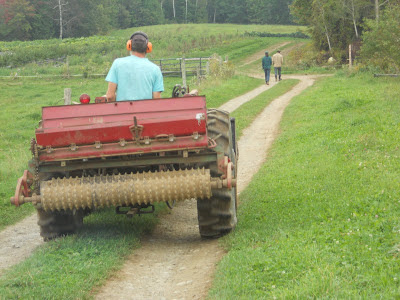 Prentice off to seed some cover crops. Winter rye, planted now, will put on enough root and top growth to hold the soil right through the fall and winter, ensuring that our precious soils don't get eroded by spring rains and washouts. Some of it will be allowed to grow and set seeds in the spring at which time we will cut and bale it for mulch. Most of it will be plowed under as early as we can get on the fields next spring and its organic matter will nourish the soil and next year's crops. 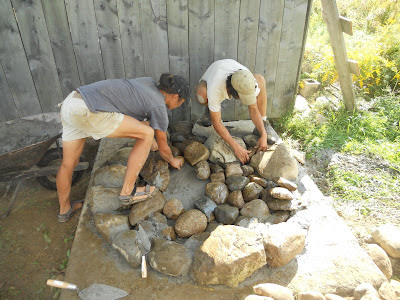 We started the base for the bread/pizza oven. Do you believe it?! This has been one long wish and dream and project but it is well underway with a committed and excited team of (very amateur) masons going for it. We are at 12" tall by 68" wide by 78" long--in the share of an oval. Once we get the base done (by next Friday??) we will plan our earthen oven building party, and that is where you may want to come and help. More details when we have the base done! 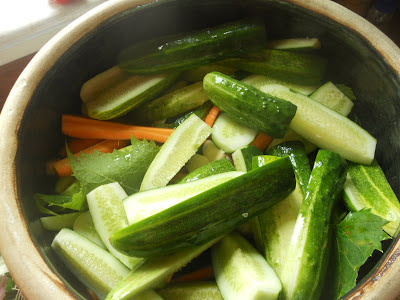 And let us not forget the canning and freezing and pickling and lacto-fermenting.  . . into the late hours, some nights, I am afraid. This is a crock of Prentice's lacto fermented mixed vegetables before salting and fermenting. Best darn pickle around, I tell you. We will put some out at CSA distributions this week for sampling. Let us know if you want to buy a mess of picklers or paste tomatoes. We have lots and they won't be coming out of the gardens for too much longer.

Well, that gives you a good look into things around the place. Summer vegetable, cheese and egg shares wrap up on the 9th of October and Fall Shares begin on the 16th. We are sold out of Fall vegetable and egg shares but Appleton Creamery would take on some more cheese shares, if you are interested. Apple shares from Out on a Limb began last Tuesday and will go through Nov 6th, on every other Tuesday.

All the best to you and yours this lovely September of 2012!
Polly

Posted by Villageside Farmers at 9:21 PM No comments: